More than ever before there are Chaga mushroom hunters teeming in the Asheville NC area, peddling their findings on Facebook marketplace. In fact, I recently met a Chaga hunter in the parking lot of a local Wholefoods in Asheville to buy a pound of Chaga chunks for $25. It was being sold as powder, but I wanted the bulk Chaga chunks to make sure it really was Chaga, as there are a lot of look a likes growing on other types of trees besides the notorious high elevation 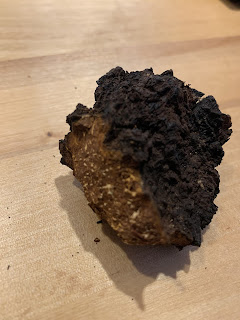 yellow birch that Chaga is known to grow on.
Chaga is one of those mushrooms believed to have all sorts of curative properties, and it can be put into smoothies, or made into tea, or mixed into coffee. I broke up the chunks and put the smaller pieces into a coffee grinder and then mixed the powder into ground coffee that I poured hot water over, resulting in French pressed-like bitterness no amount of almond milk could tame.
I had planned on hunting the Chaga myself, and I did go up to a spot near Mt. Pisgah, but didn't see any. I also travelled to an area on the way to Mt. Mitchell, and I did see some there, but it was too far up the tree trunk to be safety captured (you need to saw or pull it off as it is super woody and not like picking the common wild edible mushrooms like chanterelles, milk caps, chicken, lion's mane, etc). On that same trip, the car broke down (faulty sensors on the new cars today make me pine for horse and buggy days), so I haven't been up there since.
However, there was a time when I walked into a forest of yellow birch trees and saw Chaga hanging about like black fruits, waiting to be picked. The guy I bought from said he only takes half, to let the rest grow - which is a common ethic mushroom hunters seem to embrace.
If anyone were up for going to scout for a new patch, I would probably be into it, because it is an adventure - an obscure one that probably isn't on the list of things to do in Asheville.
Disclaimer: naturally, I cannot claim anything about the veracity of the uses of this fungus, nor can any statements herein be considered authority for the identification or safety of Chaga.
at December 31, 2020